Menu
Log in
Register
Install the app
You are using an out of date browser. It may not display this or other websites correctly.
You should upgrade or use an alternative browser.

While re-watching David LO Smith's workshop video that he did for last years virtual show I was reminded that quite often the job itself doesn't present the biggest problem for machine tools it's holding the item securely in the right orientation that proves most challenging.

Needing to drill out some cast brass brake hangers and shoes I was struggling on how to hold them because the castings were ever so slightly miscast meaning that each part had to be slightly tilted to get the hole to go through cleanly without coming out of the side of the casting.

I thought I would share with you the method that I came up with. 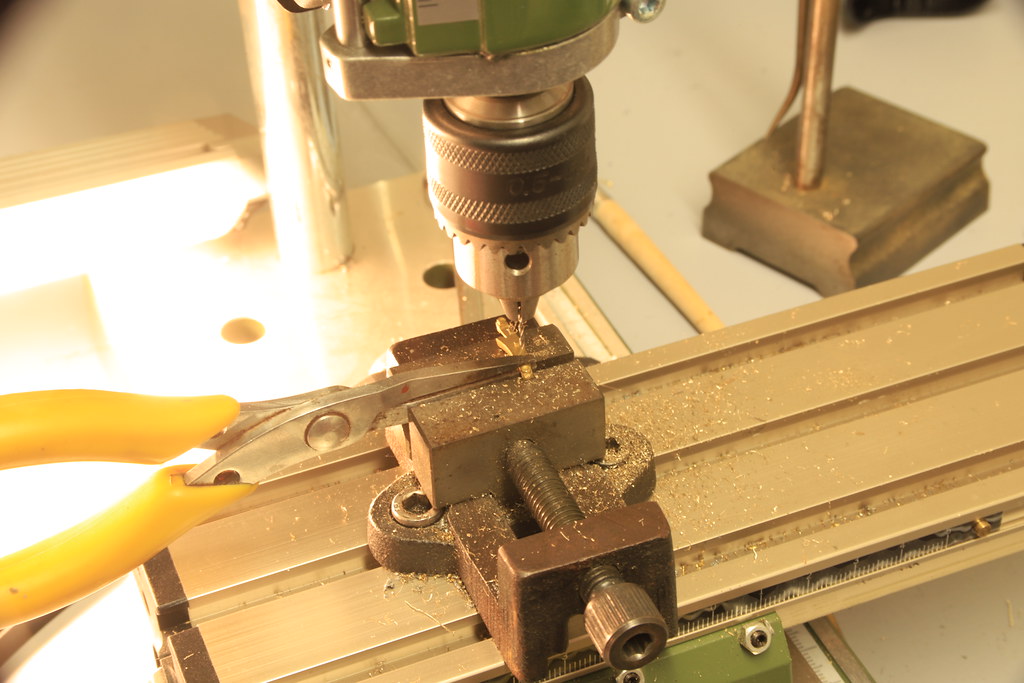 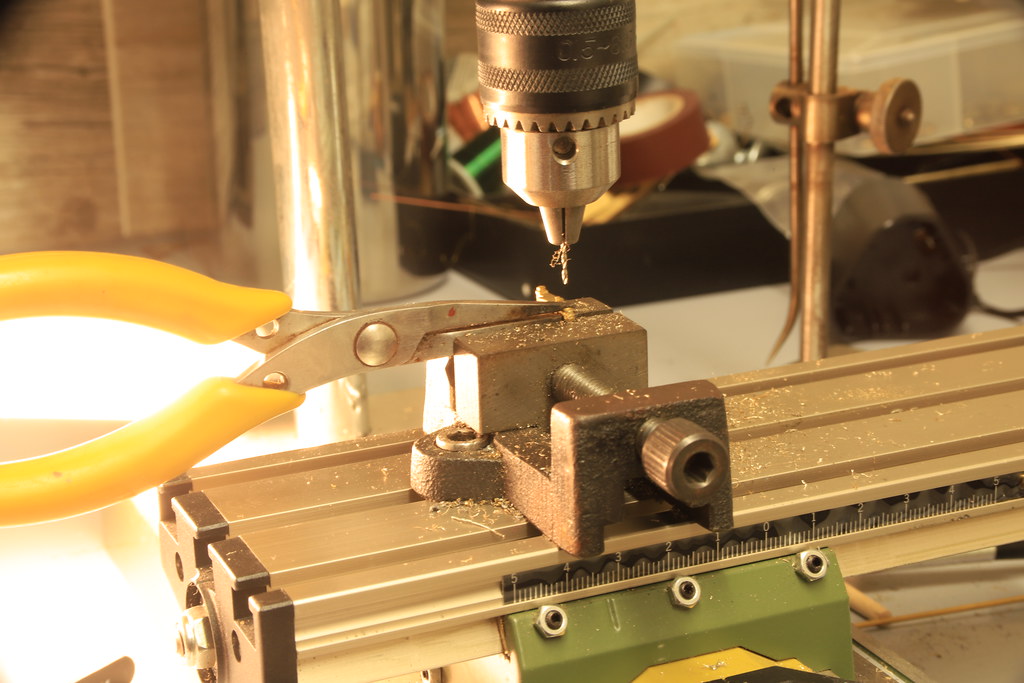 I gripped the pliers in the small machine vice and bought the drill bit down in front of the part to check alignment, adjusting until the hole would pass through the casting correctly before aligning the drill bit over the point to be drilled.

I have had these pliers for years and I removed the spring for a job and never put it back this means that the jaws stay where you put them so ideal for using both hands to do the set up.

They have quite straight but quite narrow jaws (3mm for most of their length tapering to 2.6mm at the ends) and I wish I could buy another pair as using them for soldering many times has started to corrode the ends of the jaws.

Then to start drilling grip the handles of the pliers to keep the part in place and operate the drill with the other hand. I had to keep minutely adjusting the angle as I drilled each end of each casting but all six were drilled both ends without mishap.

Bodgery of the highest order, Rob.

no, Brian, this is only second order bodgery.

enjoy a possibly well-known example of a deeper approach

simond said:
no, Brian, this is only second order bodgery.

enjoy a possibly well-known example of a deeper approach

Having driven a forklift and knowing what can suddenly happen , I got the shudders when i looked at that picture thinking of how many things could go wrong .
Cheers Paul

Rob, where did you get the vice from, as I could do with a new one?

Sorry, I don't know what make it is. I bought it second hand some time ago.

I have an identical one that came with my Unimat. Putting two and two together, I assumed it was from that source but I’m not 100% sure.
J

Definately ex- Unimat.....still have mine from the long departed lathe.....

I have ordered a new one from Amazon Germany, should get here buy Wednesday. Then I can carry on with the tender.

Hello Rob, nice trick, thank you for sharing it.

On a similar theme, for anyone who hasn't seen it, these sprung holders for round items are made by Expo tools (and probably others too) and available on Ebay for under a tenner:

Squeezing the ends together compresses a pair of pretty strong springs inside the metal shafts, opening the gap between the middle white bars and their plastic projections, so that a circular object can be securely clamped between them: hugely useful!

Excellent Chaz I shall be looking for one of those.

That does look like a handy addition to the toolbox….

Thanks Dan, I hadn't managed to find one.

Apologies - I should have included a link to save you having to search!

Another tip that I picked up from Chaz over on RMWeb just before the crash was ceramic headed tweezers.
I bought a set of 3 from Germany via eBay and they have rapidly become one of those how did I manage without them tools.

These are the ones that I bought
Last edited: 5 April 2022

Curious, I bought a pair, and barely use them!

simond said:
Curious, I bought a pair, and barely use them!
Click to expand...

I have umpteen pairs of tweezers but I find that the tips are so fine that things tend to ping out of them when gripped.

With the ceramic ones I can grip things much more firmly plus I am hoping they don't rot from flux fumes. An affliction which affects most of my tweezers...